Heavy rains and fog threatened to disrupt the start of Untamed New England, presented by Plum Creek, but the worst of the weather cleared in time for the 10:30am start at The Birches Resort on the shores of Moosehead Lake.  Racers began with an orienteering prologue designed to separate the teams and thus avoid a mad rush for the canoes.  While the top teams finished the prologue in well under an hour, this preliminary course proved a challenge to Guambras Powerade-Explorer from Ecuador and Team Timber Wolves of New Hampshire.  Taking almost four hours to finish, the two teams were redirected to Checkpoint (CP) 7 to continue unofficially.  Despite getting lost, both teams were in good spirits and excited about getting back on course.

The rest of the pack jumped into canoes for the first 5 mile paddle to Checkpoint (CP) 2 at Little Kineo, the first part of the 35 miles of Leg 1 that included stops for a trek and rappel on Little Kineo, a trek on Big Kineo Island and a long crossing to Lily Bay.
Team Peak Performance and Team France battled for the lead from the start, with Team France trailing by a mere 15 minutes arriving at CP11 at Transition Area (TA) 1 at Mudbrook Camp before heading out on the bike.  Spanish team Columbia Vidaraid was hot on their tails, following just 30 minutes behind.  Leaving TA1 at Lily Bay teams navigated on bike the 6+ hours to CP 18 at destination sponsor Appalachian Mountain Club (AMC)’s Gorman Chairback Lodge on Long Pond.  Teams stop there to complete both an orienteering relay course and a small conservation project involving stacking firewood.    Teams also can take advantage of the lodge facilities, catching some sleep  in the comfy lodge chairs or bunkhouse, and partaking in a pancake breakfast. 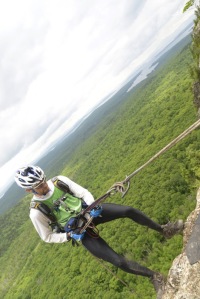 AMC is thrilled to be able to showcase their new lodge to Untamed New England and the world.  “The breadth of activities racers are involved in—from hiking and trail running to paddling, rafting, orienteering, mountain biking, and more–helps to highlight the 100-Mile Wilderness region and Moosehead Lake region as premier locations for outdoor recreation. That’s one of the goals of the Appalachian Mountain Club’s (AMC’s) Maine Woods Initiative, and we are pleased and honored to welcome athletes from around the world to Maine and to AMC’s nearly 70,000 acres of conservation and recreation land,” said AMC Senior Vice President Walter Graff.
Peak Performance was the first team to arrive at CP 18 at 1:12AM on Thursday, followed by Teams Sweco Adventure, France, Raidlight, and Columbia Vidaraid well before dawn.  While much of Leg 2 has gone smoothly for teams, Karen Lundgren of Peak Performance arrived on a flat tire, and a team member of Team France spent considerable time at the lodge repairing a broken derailleur with improvised tools from the AMC.
As of 8:30AM 8 teams have left the lodge under clear, sunny skies and cool temps on route to TA2 at Abenaki Camp, and another 5 teams are at the lodge in various stages of activity.