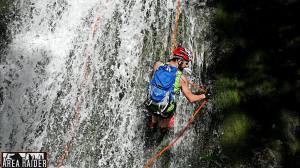 – The 43 teams present on the starting line of the prologue of the Gaspésie International Raid have completed the course: a very technical one for the greatest pleasure of the experienced adventure racers. All the racers crossed the finish line with a great smile on their face, so pleased by this race course full of surprises: some rope breathtaking rope sections, very technical mountain bike sections on Mount St-Joseph, a challenge called «the particles accelerator », where the raiders had to slide down a dam of 7 meters high into a river. Many international experimented raiders have qualified the prologue, one of the best race course they have ever done.

One hundred and sixty youths from various secondary schools in Gaspésie have traveled to Carleton to take part in the Raid Jeunesse Desjardins, and take a start at the Pointe Tracadigache with the professional raiders. All the youths have done the whole race and were very thrilled by this experience.

The winner overall for the prologue for the 300K is the Canadian team composed of 4 men, Dynafit/Skimoeast, followed by the French team of 2 men, Cahors Lot Orientation and of another Canadian duet, Spin Sport Plein air. For the 150K race, the 3 leading teams are from Gaspésie: two 4 men teams, the GalopeuXtreme and Les Beaux-frères, and a duet, the Chic-Chocs.

The start for Day 1 tomorrow will be at St-Alexis de Matapédia, in the Plateaux area, in the Matapédia Valley. Don’t  miss it!