Spirits are high as the final teams are welcomed with pizza and champagne, across the finishing line at Ulladulla, in the 2016 AR World Series Championship. 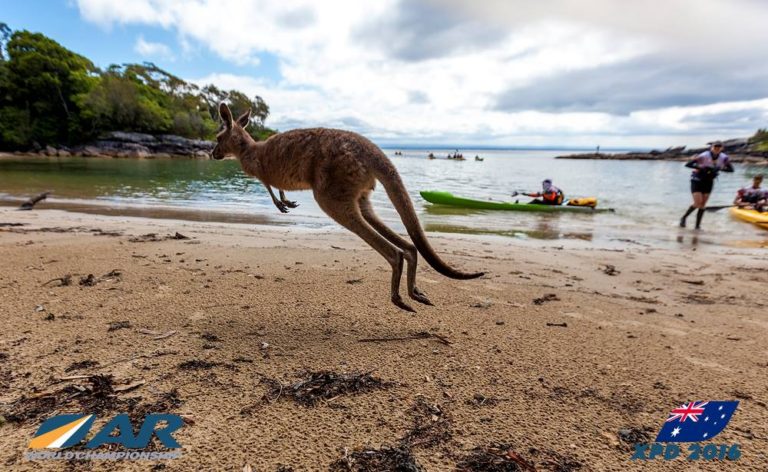 Some selected highlights of the 8 day expedition race were:

The Prologue:
Teams had to complete Aussie themed challenges such as eating vegemite sandwiches, and a beach flags competition.  Traditional owners welcomed the athletes.
Day 1
35km sea kayak around the beautiful, oceanic Jervis Bay with dolphins and whales and local wildlife on shore.
jervis-bay-jangaroo
Day 2
95km Florence Head with a hell hike-a-bike.   In this hilly leg, the teams had a challenging hike-a-bike section which required moving their bikes over terrain which was more like in a trekking leg.
Special mention of Goldfish, who managed to get their tandem mountain bike over this section of the course.
hike-a-bike
Day 3
45km wilderness trek through the rugged Budawangs.  Some teams struggled with navigation as trails disappeared and others appeared, causing confusion and lost time, especially at night.

Special mention of Team 4050 Adventure, who collected litter on the trek, shouted the volunteers at the TA pizza and then helped load the truck with bike boxes, before continuing on.

Day 4
Bungonia Caving.  Teams navigated through various sized caves to collect CPs with a mud map.
Special mention of Intrepid Tigers who arrived just after a hail storm to start the caving.  It was cold, wet and muddy making it even more difficult.
intrepid-tigers-caving  intrepid-tiger-caving-behind-shot
Day 5
44km Pack rafting Leg on the Upper Shoalhaven River.  Teams boulder-hopped down the Slot Canyon carrying their pack rafts down to then paddle down the Shoalhaven River.

The next AR World Series Championship will be Wyoming, USA in 2017.